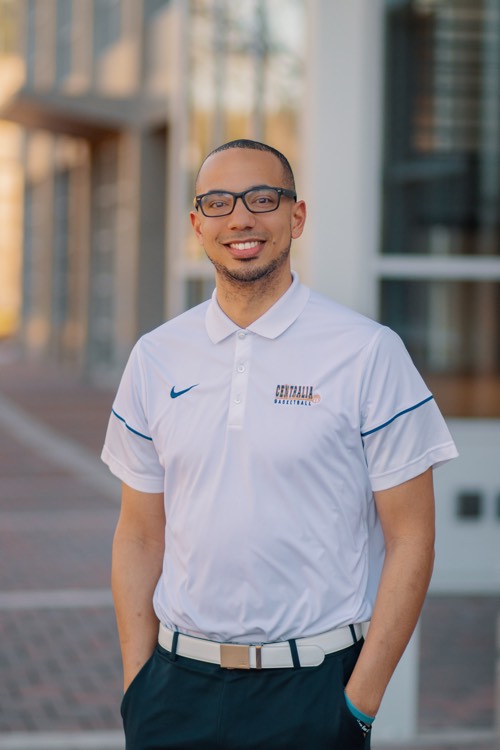 Jonathan McMillan is a coach, mentor, and student earning a bachelor's degree

A good beer is a lot like the right pair of shoes – you know when you’ve found the best. And Jonathan McMillan knows both. In fact, he has a gift for finding the finest of just about everything.

McMillan’s curated collection of athletic shoes numbers over 360 pairs. Each is different; unique in style, comfort and function. Today’s pair? Sleek Nikes that light up and self-lace at the touch of a button or via an app. McMillan appreciates athletic footwear so much, he even attends shoe conventions to see what’s new.

He puts just as much energy into sampling the best beer. He loves exploring new breweries and enjoys a well-curated brew tour. Overall, he prefers pale ale but nothing too light. And he doesn’t do hard alcohol or porters. “My favorite is always an Alaskan Amber,” he said. “I got really into Superfuzz Blood Orange Pale Ale from Elysian and the Fresh Squeezed IPA from Deschutes, but Alaskan Ambers are my favorite.”

McMillan is good at finding the best, which also happens to be his job. He travels the northwest searching for talent as Centralia College’s assistant men’s basketball coach. And much like curating his shoe collection or unearthing the perfect beer, he has a process. “I’m not just looking for kids who can put balls in hoops,” he said.

McMillan looks for student athletes who excel in several areas. Of course basketball skills are primary, but so is the ability to push hard, be a good teammate, get good grades and be respectful. “I want the kids who stand out, are good citizens and good people,” he said.

In addition to reviewing school records and talking to coaches, McMillan has a few tricks. “I always talk to the lady taking tickets at a game,” he said. “I ask, ‘What do you think about this player?’ They know who they are and they tell me … And I see if they’re taking their warm-up seriously. If they are, they’ll take the game seriously too.”

Love of the Game

It wasn’t long ago that McMillan himself was on the court. He played high school basketball in Pe Ell and college ball for Grays Harbor Community College. While he enjoyed his time there, the Aberdeen community wasn’t a good fit and McMillan returned to Centralia. “I was the kid who thought the grass was always greener on the other side,” he said. “But I was so glad to be back in Centralia.”

His own basketball career ended with injury. First he tore his left ACL. “Then I came back too soon after surgery and did it again,” he recalled. When his right ACL tore as well, McMillan knew it was time for a change. Fortunately, Centralia College Basketball Coach Jason Moir was looking for help.

With several years of playing and high school coaching experience under his belt, McMillan was the perfect fit for the role. And the pair made a good team. “Jason Moir has given me a lot of responsibility and I owe him everything,” McMillan said. “He has always trusted me and has never doubted me in anything. He’s the main reason I am where I am today.”

McMillan’s ability to relate to players is invaluable. “At 33-years-old, I could be their older brother,” he said. “I’m young enough to be able to relate.”

These wide-ranging preferences reflect McMillan’s diverse cultural background. He was born in Florida to a Bahamian mother and a French father. Then his family moved to Pe Ell, where he developed a strong connection with rural life. This background allows him to relate to people on many levels, a skillset that’s helpful on a team with players from as far away as Alaska and the Sudan.

McMillan also understands what it’s like to struggle, after experiencing family hardships as a child. “I remember eating eggs out of a microwave,” he said with a laugh, adding, “When you come from nothing, you don’t want to ask for anything. You don’t want to seem broken down. But I tell my guys, ‘Don’t be afraid to ask.’”

He often reiterates this message as TRiO’s Upward Bound specialist. “Financial aid is huge,” he said. “Get your scholarships, grants and loans. It’s imperative. Everyone at Centralia College has an open door policy. Just come in and say, ‘I need some help.’”

McMillan has seen how education can turn things around. “After my dad got out of prison, he went to Evergreen and became a counselor,” he recalled.

The positive transition made an impact on McMillan, who is currently earning an applied bachelor's degree in Applied Management at CC – yet another way he relates to his team. “It’s hard to believe I’m only a quarter and two weeks away from having my bachelor’s degree,” he said.

McMillan’s path to higher education was circuitous. After earning his associate degree in 2007, he worked for the Department of Printing for five years. He took a semester at Saint Martin’s University, but stopped due to insufficient financial aid. He tried Centralia College’s BAS-AM program at that time, but it didn’t stick either. “I wasn’t very tech savvy,” he said.

He went on to work in a variety of capacities, including almost every aspect of the restaurant industry. “But I can’t cook,” he clarified emphatically.

The idea of getting an education stayed on his mind, however, thanks to TRiO Director Liisa Preslan and Shelley Bannish, Centralia College’s director of student life. “Liisa would say, ‘What are you doing? You need to be in school. You smell like chicken fried steak,’” McMillan recalled with a laugh.

Their encouragement pushed him in the right direction, but it was an exciting new addition that would change his mind. “When my daughter was born in October of 2016, I knew I just had to be better,” McMillan said.

The BAS-AM program helped him do just that. And he built a strong support system along the way. “Our cohort is amazing,” he said. “We might not always see eye-to-eye, but we’re always there for each other.”

McMillan knows the value of a good team. He is especially grateful for the support of his girlfriend, Breanna. “We have been together for a long time, so if there is anyone I owe anything to, it would be her,” he said. “She has always had my back from day one.”

That support is especially invaluable as a parent, which is an education in and of itself. “As much as you try to make something perfect, whether it’s a game or parenting or whatever, you have to adapt to what life gives you and make it what you can,” McMillan said. “And if my daughter decides she wants to dance instead of playing basketball, I guess I’ll be twirling that little wand.”

Being a father also helps McMillan maintain perspective. “No matter how bad of a game or day I’ve had, coming home to see her – and how excited she gets when she sees me – makes me realize it’s just a game and there’s always tomorrow,” he said. “There’s always something bigger out there, and it’s her.”

Much as he curates his shoes, his brews and his players, McMillan is now curating his family and his education. His goal? To become a full-time college basketball coach at a four-year institution. With the experience and skills he’s gaining at Centralia College, he’s well on his way.