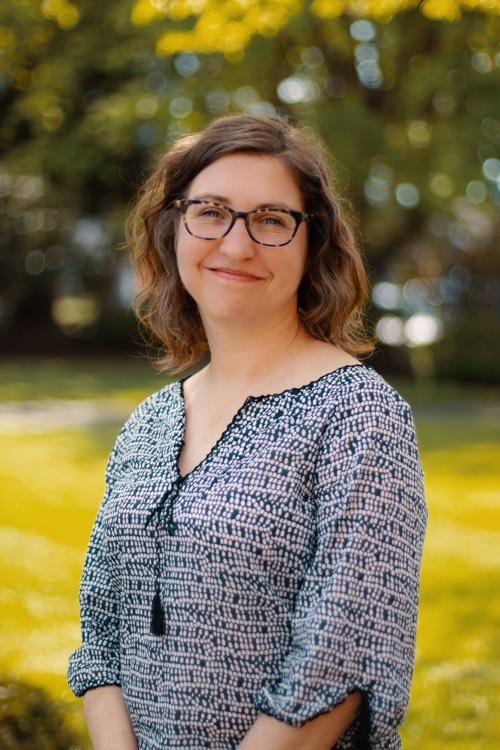 “The stage is a magic circle where only the most real things happen, a neutral territory outside the jurisdiction of Fate where stars may be crossed with impunity. A truer and more real place does not exist in all the universe.” ― P.S. Baber, Cassie Draws the Universe.

The stage captured Emmy Kreilkamp’s attention at a children’s summer theatre program in northwestern Indiana. As a child, she explored many areas of theatre, including backstage roles. But it wasn’t until she embarked on a truly fantastic opportunity that it took center stage in her plans for the future. “In high school, I went to live with theatre critics in London,” Kreilkamp said.

The couple took her to some of the best performances in the UK. She watched Ian McKellen, Dame Judy Dench, Clive Owen and Maggie Smith onstage. “It really helped develop my aesthetic sense,” she said. “I got a glimpse of what is possible.”

Seeing performances at the height of achievement nurtured the seed of interest already growing inside her. When she returned home, she knew she wanted to study theatre.

Kreilkamp enrolled in St. Joseph’s College, returning to London for her junior year to experience theatre from a new perspective. After graduation, she traveled to Tanzania, where she took a position teaching college English. It was a transformative experience.

While there, she produced and performed in a production of Athol Fugard's “My Children! My Africa!” with two of her students. The South African script tells the story of a generational rift that emerges over the dismantling of apartheid. Kreilkamp and her students took the play on the road, touring through universities and technical colleges across the country.

“It was a more authentic glimpse into what daily life was like in Africa,” she said. “Teaching at the college, we had running water, electricity and mosquito nets. But outside we were riding around in these makeshift vehicles on dirt roads in the heat, listening to Bob Marley on speakers with everyone singing along.”

The production was well-received. “People would stand for two and a half hours to watch the play because we ran out of seats,” she said. “It was a wonderful experience.”

After returning to the States, Kreilkamp earned her Master’s in Theatre Arts from Kent State University. Afterward, she spent a few years working in Chicago for a theatre company and in a book store. “I was struggling to make ends meet and have time to do theatre,” she said. “I wanted more time to actually study theatre, so I decided to go into academia. But for that, I would need a PhD.”

Kreilkamp enrolled at Indiana University where she enjoyed the unity of theatre practice and theory. “Other programs had more of a silo approach,” she said, “but I didn’t want to choose one or the other.”

Her dissertation focused on theatrical performances in concentration camps during the Holocaust. To do it justice, she spent five years studying German and listened to hundreds of interviews from Holocaust survivors who either performed in or witnessed theatre productions in a concentration camp. She also traveled to Germany twice to visit various concentration camp sites. “I focused on the impact the performances had on the people in the audience and the people performing,” she said. “I wanted to know, did it not only help people psychologically and spiritually, but were there actual material consequences or benefits to those performances that – in practicality – helped people survive.”

She found there were. Theatre’s uplifting role in this dark chapter of human history wasn’t merely theoretical. It provided practical measurable benefits. Being part of a production allowed people release from their more strenuous – and dangerous – work assignments and performers were given more or better rations. In one instance, they were given shoes for a performance, which they were allowed to keep afterward. Those shoes helped them survive the death marches at the end of the war.

“I’d always been interested in art during extreme time periods like war,” Kreilkamp said. “For me, that was a test to the true purpose of theatre and any other art form. I think we incorrectly have this idea that art is for peacetime; it’s for the elite, for the prosperous. That’s just not true. History shows us that even in the most extreme circumstances, when people don’t have enough to eat, they do have energy for the creation of poetry, fine art, music and theatre. I think there’s really something fundamental that art provides us in those times of trauma, reconnecting us to our community and our identity. In times when people feel isolated and dehumanized, theatre provides community and a reminder that they’re human beings. They’re more than a body moving through space trying to survive.”

After earning her PhD, Kreilkamp taught as an adjunct professor at DePaul University and the City Colleges of Chicago. When her children were both in school full-time, she launched a nationwide search for collegiate employment. She interviewed in New York, California and Pennsylvania, but Centralia College won her heart. She liked the area for its scenic beauty and the region’s more open minded nature. She especially appreciated how Centralia College invests in the longevity of its professors.

Today, Kreilkamp teaches academic classes on subjects like dramatic literature and studio-based classes like acting and directing. She enjoys exploring both areas of the discipline, as she did in her PhD studies. She has introduced new classes like Multicultural Theatre to the college’s more traditional offerings like Intro to Shakespeare. She also selects and oversees three to four major productions each year.

Kreilkamp earned tenure in April 2019. “It’s very gratifying because it feels like confirmation that the work you’re doing is valued,” she said. “I’m grateful to have the job and I know that tenure track positions in the performing arts are few and far between. I’m grateful every day that I can go to work, do what I love and inspire my students to do the same.”

Kreilkamp encourages her students to build a career around their passion. “I had jobs in social work or in arts administration that were self-supporting but I didn’t enjoy them,” she said. “You spend the majority of your waking hours at work, so if you don’t do what you love, it’s going to be a real struggle. So follow what you’re truly passionate about. The first step is determining that – what makes you feel alive. I recommend finding what you love to do and then figuring out a way to make a living at it.”

For many people, theatre is both a passion and their safe space. Kreilkamp recalled one student who told her the theatre was her home. “She had struggled with social anxiety and feeling unaccepted by many groups of people,” Kreilkamp said. “This was a community where she felt embraced for who she was. They’re not judgmental; they’re open minded and inclusive. The theatre provides people with that family type experience.”

In 2018, Kreilkamp started a summer theatre program for young people, similar to the one she participated in as a child. Last year, the group included 30 participants between the ages of 11 and 18. This year, she plans to expand the offering from one to two weeks, in which students will write and perform their own musical.

She also has exciting plans on the horizon for her college courses. In the future, she hopes to add additional classes to enrich students’ understanding, including some specialized courses on subjects like women in theatre. “The administration has been very supportive of me expanding the curriculum,” she said. “That’s been a big highlight.”