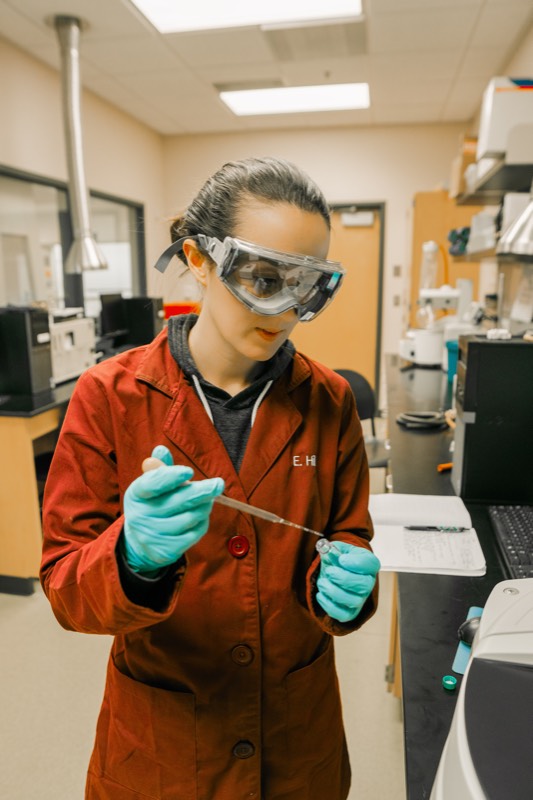 They call it “The Instrument.” This mildly ominous moniker is fitting for the impressively powerful high-tech machine, officially called a Nuclear Magnetic Resonance Spectrometer (NMR).

Thanks to a Lovington Grant and Office of Instruction funds, a brand new NMR now resides in Centralia College’s chemistry department, equipped with a 60 megahertz magnet.

The Instrument allows students to both identify and understand the structure of various molecules. It’s one of the key pieces of equipment used in determination of chemical formulas. “This is the molecule equivalent of a MRI,” said Associate Chemistry Professor Karen Goodwin. “If you go to a hospital and get a MRI, they can use that to figure out what’s in your body. If it’s chemical information you’re looking at, you need an NMR. It does the same thing. We don’t fit in there – but a molecule does.”

The NMR generates a report marked by gracefully arcing lines. “It looks rather artistic,” Goodwin said.

It may seem simple but a great deal of information is hidden within the seemingly abstract image. “I teach my classes how to interpret the data – what does it mean in a molecule?” Goodwin said. “What this kind of spectroscopy does is actually show the location and the number of hydrogen atoms, and what they’re next to in the molecule.”

Most molecules have lots of hydrogen atoms arranged in various formations. Knowing the amount and location is key to molecule identification. And that’s just the beginning. “If we know where the hydrogens are, then we can replicate what the molecule looks like,” Goodwin said.

This knowledge can be used to replicate a substance for medicinal use. “Say I work as a medicinal chemist or for a pharmaceutical company, and I’ve received a plant extract that’s been shown to have activity against a breast cancer cell line,” Goodwin said. “Now, instead of potentially extracting it from the plant [which can be impractical on a large scale], I can send that information off to someone else who can make it in the lab from other materials.”

The NMR can also identify mystery substances, assisting in forensic chemistry. “Have you ever watched NCIS?” Goodwin asked. “Imagine I found this white powdery substance and this guy tells me it’s aspirin. I’m like, ‘I don’t think so dude.’ But how do I know? Right now I could go into a library database and actually figure it out. These things are like fingerprints. The NMR will tell me the percentage that it matches.”

Working with the NMR will teach students these skills and help them understand the process so they know if something is working correctly later on. “One of the most valuable things in the workforce is the ability to know if an instrument is lying,” Goodwin said. “You’ve got to know.”

The new NMR gives Centralia College students an edge. “Undergraduate research at the lower grade levels generally doesn’t happen in university, only in the junior and senior level,” Goodwin said.

In CC’s chemistry program, students are personally using the NMR as freshmen and sophomores. Even high school Running Start students use it. This makes CC graduates highly competitive for upper level graduate research positions. “My students can step in and successfully compete for those positions because they’ve had some experience,” Goodwin said.

Prospective students who want the most comprehensive undergraduate education with hands-on experience will find what they need at CC. “Here you’ll actually be able to use the machine,” Goodwin said, “and you’ll be in a class size of 10 instead of 200.”

In-depth experience working with the NMR is invaluable. “In the third quarter of sophomore chemistry, the labs are all project based,” Goodwin said. “All the students will be using this machine. This is the kind of tool scientists are using to study our world.”