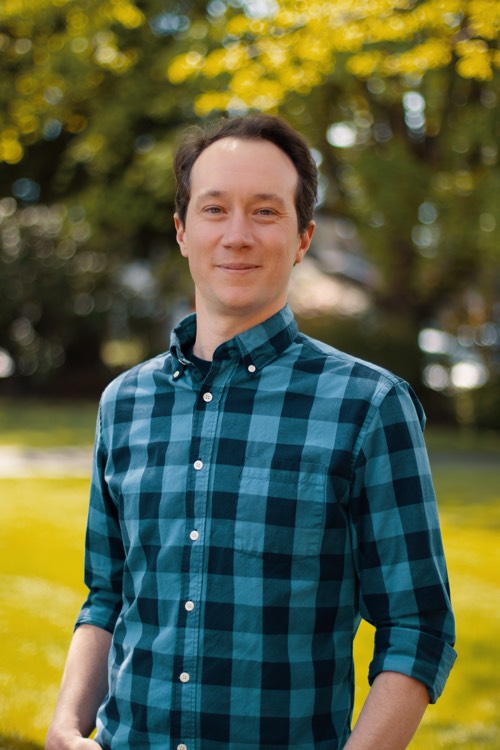 Picture a librarian. You may imagine a soft spoken introvert who enjoys calm, quiet and order – and who only enjoys adventure located safely on the page. At first glance, Centralia College Librarian Ryer Banta may seem to fit the mold with his calm, unflappable demeanor – but there’s much more beneath the surface.

Just ask and he’ll tell you about working with a pack of wolves and a grizzly bear on a Norwegian film set. Or when he deconstructed, moved and rebuilt an entire log cabin. How about the time he tagged a herd of sheep? He’s discussed cookies with Twin Peaks’ Kyle McLachlan and saw Daryl Hannah dressed up like a mermaid. And he helped construct a giant Ark on the dry plains of Montana.

Banta is the Indiana Jones of librarians.

He actually began his career as a documentarian, producing abstract films to project behind bands during performances and tour documentaries with up-and-coming groups. “The first documentary I did was with a band called ‘The Microphones,’ who then changed their name to ‘Mount Eerie,’ with Phil Elverum in Anacortes,” Banta said. “He releases his own records and has ties to the K Records scene in Olympia. NPR does pieces on him now.”

Banta went on tour with Elverum and Kyle Field of Little Wings, filming along the way. The project was a success. “I sold all my copies,” Banta said. “It was great and it has been interesting to see those artists go on to have bigger and bigger careers, build up their followings and change paths along the way.”

Banta worked on several other films as well, including North Fork staring Nick Nolte and Daryl Hannah. It was shot in color, but everything was designed to look black and white. “I painted an entire restaurant grey, down to filling ketchup bottles with grey paint,” he said.

After moving to New York, Banta did a tour video for Akron Family and a music video for The National. Both films were met with enthusiasm but Banta found himself searching for more. “I wanted to be a filmmaker and I had found some success, but making money in that world is pretty hard,” he said, “even if you’re doing things where there’s a built-in audience.”

To make ends meet, he found work in coffee shops, as a delivery driver, working construction and more. “I did a lot of aimless wandering,” he said. “It wasn’t all glorious.”

He also worked with young people at local film schools, helping them with equipment, framing shots and various technical aspects. "I really liked teaching and working with students, especially in a really hands-on way,” he said.

Around this time, Banta met his wife, Cathy, who was working for New York Public Library. Getting to know her and her librarian friends piqued Banta’s interest in the profession. Additional factors, like the economic crash of 2008, compelled him to enter the field. “I’d always loved libraries and some of the larger ones were starting to have media production facilities,” he said. “I thought my skills might not be completely irrelevant. I thought, that’s the kind of librarian I’ll be – the tech equipment guy.”

Banta earned his bachelor’s degree at Montana State University and his master’s from University of Washington. His professional librarian career took him to Western Washington University, then back to his alma mater, Montana State University, before coming to Centralia College three years ago. “I love being a librarian,” he said, “helping students build information literacy. These skills are very crucial in today’s world – looking up information and figuring out what’s credible.”

Discerning credibility is an important aspect of Banta’s work. He recently collaborated with a Centralia College science classes to help students hone this important skill. “The science that’s presented in the news tends to sensationalize things,” he said. “This activity walks students through figuring out if something is credible or not. “

Sometimes the publication and author appear credible, but the research behind it proves to be faulty. It’s important to know how to detect issues – even from normally credible sources. “One researcher we looked at has recently been discredited,” Banta said. “He was a high-profile guy whose research findings were turned into FDA recommendations.”

Banta teaches students to do more than deeply evaluate one source. When focusing on just the source itself, “those internal clues won’t tell you the full story,” he said. “You have to use the full power of the web to check what’s known about that person.” In this particular case, he continued, “a quick search about that researcher’s name brought up a bunch of news reports about them getting into trouble and being discredited. Students are typically very shocked that they rated something as really credible when, had they just used the tools of the web, they would have found out there are some big issues.”

A Free and Open Exchange

After coming from the highly copyrighted world of music and film, Banta finds library culture refreshing. “It’s all about sharing, which is a really nice breath of fresh air,” he said. “It’s really cool to come to a professional community where everyone’s helpful and you can make use of everything.”

In the film industry, Banta saw proprietary disputes get in the way of creation, which he feels is a loss for all concerned. Through his position at Centralia College, he collaborates with other librarians and faculty members on class and project ideas, and he incorporates the concept of open licensing and information sharing into his lessons. This is both a passion project and an area of academic research for Banta. “A lot of my work is informed by the idea of sharing,” he said. “It’s a big part of what librarianship is about. It’s what education is about. It’s about sharing work and opening ourselves up to these fantastic things.”

The open education movement is not only about providing students cost-free course materials, but also making sure faculty have the freedom to create, revise and remix learning materials as they see fit. “I want to help grow that here, while also maintaining academic freedom and flexibility,” Banta said. “If we all can help students save money, it seems like a win-win for me.”

In the spirit of free and open information, Banta is currently revamping Centralia College’s historical archive, updating its technology and content. Traditionally a source for past College-related newspaper clippings, historical information and the school’s yearbook collection, Banta plans to incorporate other components. “Our archive can be a capstone project showcase as well,” he said. “And faculty members write research papers every year, typically on innovations they’re doing in the classroom. It will be amazing to share that work for our community and beyond.”

Centralia College appreciates Banta’s innovative work, awarding him tenure in April 2019. Banta found the process to be beneficial and uplifting. “Knowing other librarians, I know the tenure process isn’t so supportive elsewhere,” he said. “Some places can be cutthroat but the tenure process at Centralia is so supportive. It’s like you’re being guided and mentored along the way. It’s a total honor to be granted tenure here. It’s really great to be here at this school and here in this region. Everything has come together and makes so much sense for me; this is what I’m supposed to be doing. And that’s really after a lot of self-doubt and figuring it out through my 20s and 30s. It’s a nice thing to be in that position – doing what I’m supposed to be doing and where I’m supposed to be.”

And the Beat Goes On

When he’s not teaching, Banta enjoys spending time with his wife, Cathy, and their seven-year-old daughter, Cleo. “It’s a super awesome adventure,” he said. “It really puts everything into perspective.”

He also enjoys outdoor activities like hiking and biking, and he’s learning to homebrew. Of course, he still loves music. These days, he’s listening to everything from free jazz to the Japanese noise artist Merzbow. He appreciates international sounds, psych rock, old time early blues and a wide array of independent and sub-underground music. “My tastes are pretty wide and wild,” he said with a smile. “I try to go to as many live shows as I can and support the artists who are coming through. People are making wonderful, magical, mysterious music. Thank goodness they are.”