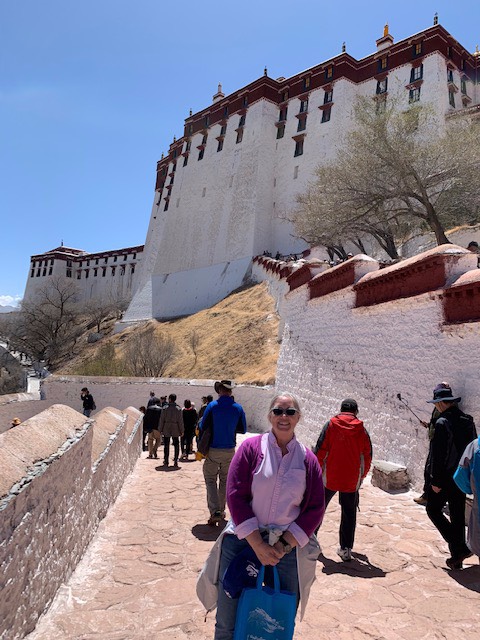 Centralia College Professor Dr. Sharon Mitchler recently returned from a three-week tour of Beijing, Tibet, Nepal and Bhutan, where she interacted with locals, witnessed amazing places, and gathered valuable insights. The experience complimented her humanities and religious studies and colored her academic understanding.

Many Americans grew up against a Western European, Judeo-Christian cultural backdrop. The resulting assumptions and baseline values are so deeply ingrained as to be nearly unperceivable. But Mitchler found that visiting societies founded on completely different cultural and religious narratives changed that.

“Being in dominantly Buddhist countries had the greatest impact for me,” she said. “The setline for each encounter is different. Even Buddhism in each country is different. I knew this intellectually, but it was fascinating to see how people move through their day in really impactful ways.” 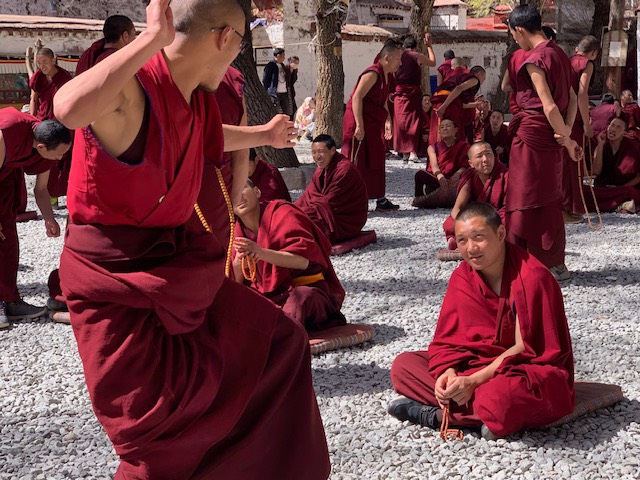 Mitchler noticed Buddhism’s imprint in the high cultural value placed on assisting others. “There was this generosity of spirit that was prevalent,” she said. “It was the go-to beginning of every conversation. It was fascinating and lovely and unexpected.”

Mitchler found this underlying desire to help others woven into every interaction. The most memorable instance took place with a group of schoolchildren in a small village outside Lhasa. One little boy arrived late, missing the school supplies Mitchler and her group had handed out. Instead of excluding him, the children naturally redistributed the supplies. “It was fascinating to watch the kids keep track,” Mitchler said. “Their culture influences how they talk to each other and look out for each other.”

“Contentment is probably a better translation,” Mitchler noted, after seeing the practice firsthand in the Kingdom of Bhutan.

“It’s part of how they decide all sorts of policies,” Mitchler said. “Every single major endeavor has to be assessed through this lens. Things have been changed because a new road or government policy was going to affect it.”

The Happiness Index stems from the country’s Buddhist roots. “The general concept of contentment is tied into Buddhism in a really fundamental way,” Mitchler said. “One of the major tenants is thinking about other people and how what you do helps others in their life journey. In Bhutan, that central tenant changes major government decisions.” 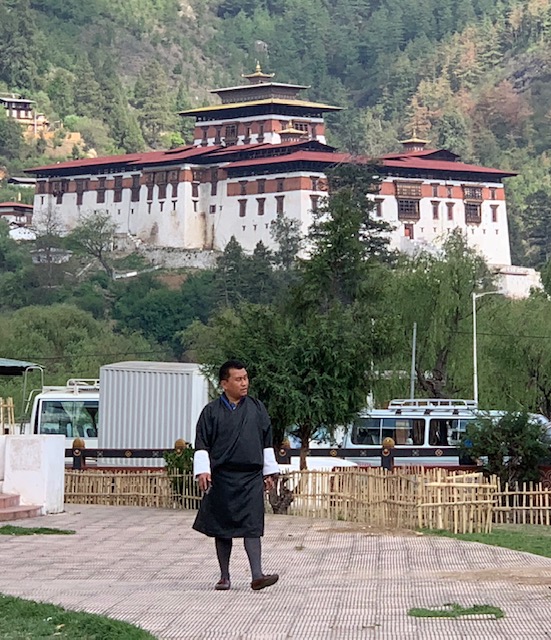 Don’t Get Boxed In

There’s rarely only one right way to do something. In Asia, this concept extends to sacred religious beliefs. Throughout her journey, Mitchler found her comprehension expanding. “It gave me about 10 more ways to talk about the Buddha – how he’s expressed in art and how people approach it as a living, breathing presence,” she said. “Teaching here at Centralia College gave me a good base, but it was amazing to be in that space and understand how little I knew.”

For example, the Himalayan Buddhas of the past, present, and future are not viewed in a chronological way. In some cultures, the Buddha can be female.

Mitchler was intrigued by the Buddhist Taras – protector entities. “They’re all female,” she said. “Some of them are very scary looking and some are very beautiful. They come from Bon, another religious practice pre-dating Buddhism that’s incorporated into Himalayan or Tibetan Buddhism.”

Just like there’s more than one way to believe, there’s more than one way to offer medical care. When several people in Mitchler’s group came down with altitude sickness in Tibet, they had options. “I took the meds my doctor back home prescribed and used oxygen,” Mitchler said. “Another person went to one of the hospitals that practices traditional Buddhist medicine. They treated her with oxygen and other forms of medical intervention that were not Western. We were both really sick and we both felt much better the next day.”

Roll With the Punches

Not only did Mitchler see an array of exotic sights – she was one. “I was the first person who looked like me that many locals had ever seen,” she said. They were as excited to document her arrival as she was. “I’m in a lot of other people’s selfies,” she said with a laugh.

While unexpected celebrity can be disorienting for some, Mitchler took it all in stride. This ability to go with the flow, she said, is key to a positive travel experience.

Mitchler’s trip was structured around personal interaction. She spoke with government officials, visited locals’ homes, explored a Tibetan farm, and ate at an old-town, in-home Beijing restaurant. In Nepal, her guide often stopped random people on the street chat. “He would see an older woman leaning out of her window and call up, ‘Grandmother, how are you doing this morning?’” Mitchler recalled. “It isn’t just about going places that are cool, to see cool objects but interacting with the people who live there.”

Mitchler also connected with a religious devotee while waiting to catch a glimpse of the Kumari outside her palace in Katmandu. “[The devotee] was overwhelmed to be in this location and hopeful the Kumari would step out,” Mitchler said. “It’s a mark of religious devotion to attend the Kumari – it’s a big deal.”

Locals believe the Kumari, a special prepubescent girl, is the living embodiment of a goddess. She is usually chosen at age five or six and sent to live in the palace where she performs certain rights until she reaches puberty. At this time, it’s believed the goddess vacates her body and she becomes a mere mortal once again.

Delight in the Unexpected

While flying from Beijing to Tibet, Mitchler found herself seated next to a Spanish gentleman. “The flight attendants spoke Mandarin and English, he spoke only Spanish and I speak English and Spanish,” she said. “I did a very poor but enthusiastic job translating.”

The man was a doctor traveling to Tibet to study and assist. Three days later, Mitchler bumped into him by chance at a remote location. “He ran up to me so excited to say hello and speak again,” she said. “I didn’t expect to use my Spanish in Tibet but it turned out to be helpful. The whole trip was unexpected that way.”

In Tibet, the old landscape is giving way to skyscrapers and new development. There are even plans for a bullet train. “People have to adapt between a really powerful old Tibetan culture and the new,” Mitchler said.

Everywhere she turned, Mitchler saw adaptation and ingenuity. “People figured out ways to make things work,” she said. “For example, when you need an electric line run somewhere, they just run another one; they just do.”

This results in massive tangles of disparate lines hanging from every pole in the city. “They’re beginning to sort it out now,” Mitchler added. “We saw some gentlemen with hard hats and vests checking to see what has voltage and what doesn’t. They were just laughing. It’s just an incredible tangle.”

This “figure it out as you go” mentality has created equally unintelligible roads and operational systems. It also spawned a uniquely laissez-faire culture. “Everyone I encountered was really relaxed,” Mitchler said. “Whenever there was a problem, there was no point in getting stressed. Unlike Tibet, they don’t have a lot of money coming in. But they have this attitude that it used to work once, we kind of have it working now, and we’re going to make it work again. People just didn’t really fuss.”

Mitchler is still processing her journey and contemplating ways to weave the experience into her curriculum. One thing that sticks with her most is the beauty of the places she visited and the awe she felt there. “Tibet, I especially knew was going to be astonishing,” she said. “But it was more astonishing than anticipated.”