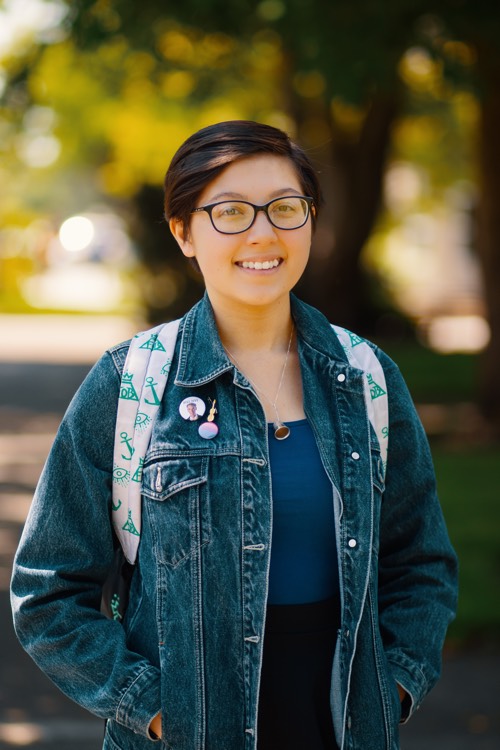 Kayla DuPont has the mind of a scientist and the soul of a creator. This Centralia College Running Start student seamlessly incorporates her love of more technical subjects like math and science with her passion for creative endeavors like writing, music and videography – and she does it all with a subtle sense of flair.

A first-generation college student, DuPont loves to learn. She completed the requisite math courses early in her high school career so she shifted her attention to science. After discovering her passion for the field in her ninth grade honors class, she took every science course the school offered. “I ran out of science classes in 10thgrade,” she said. “I just really like science.”

Centralia College’s Running Start program was a logical next step. DuPont enrolled in a wide variety of science courses to help her determine which area of the field she liked best. “There are so many options for science classes we don’t have at the high school,” she said. “When Peggy [Goldberg] showed me the list, my eyes popped out of my head.”

The higher-level coursework challenged and excited her, as did the available technology and equipment. DuPont was thrilled to analyze real human tissue samples, dissect fetal pigs and work from full skeletons. “All the anatomy and physiology labs were really memorable,” she said. “I never thought I’d be able to do those dissections or work with actual human bones.”

DuPont also enjoyed interacting with her collegiate peers. “I like being able to meet people who aren’t from my high school,” she said. “I was in Centralia my whole 12 years.”

She joined the College’s science club and became involved with other student endeavors like the Gender & Sexuality Alliance's recent drag show. “I thought, why not?” she recalled. “I’ve only been to a drag show twice before but I danced at Southwest Washington Dance Center for 12 years. It was fun getting back into performing again.”

DuPont didn’t just show up and walk the runway – she crafted a whole persona, selected a song (Tainted Love), designed a routine and concocted a getup. “His name is Charlie Bravo,” she said. “He’s an office worker whose coworkers think is very boring - but at night he goes out and performs.”

In her spare time, DuPont expresses her creativity through writing. She has drafted pieces from every genre and has completed everything from short stories to two full-length novels. One, she calls a “ninth-grade assignment that just got way out of hand” entitled Alice the Hero. The other is a work of historical fiction set in ancient Rome entitled Eranos and Camillus.

The latter is based on an idea DuPont had after simply noticing someone sitting on a staircase. “I thought, what if someone just kept sitting there?” she recalled. “In the book, Camillus just sits on the stairs because he’s training to be a monk. Then people misinterpret it, creating a political movement.”

She’s currently working on another novel and the beginnings of a screenplay which she hopes to dedicate more time to after graduation.

DuPont also has a passion for music and spends much of her free time traveling to concerts. In between, she creates music videos. “I listen to a lot of music and when I’m listening, I try to visualize it,” she said. “I get ideas for videos we can make. Then my friends come over, we make props and go to the park or somewhere to film.”

The final products are shared among the group, not released publically. They’re created for the sheer joy of production, mixed with an element of relief. “I have a lot of stories in my head all the time,” DuPont said. “It’s less wanting to get them out, and more that if I don’t write them down, I’ll go crazy. They’ll keep bugging me until I get them down on paper. I like not having the pressure of creating for an audience.”

DuPont’s creativity assists in her scientific studies. When she finds herself struggling to remember how anatomical components relate to one another, she’ll write them out as characters. She uses narrative plot to explain how they interrelate the way they do. This helps her retain tricky information and put it into practice. “I like to put things in terms I can understand,” she said.

DuPont has perfected her study skills since arriving at Centralia College nearly two years ago. As with many academically inclined individuals, she didn’t have to study hard to get good grades in high school. Tackling collegiate-level work helped her build her repertoire of study skills, something she advises others to do early. “I got really into flash cards, started using a planner and studying with friends,” she said.

She advises other students to make at least one friend in each class to share notes and study together. She also encourages incoming freshmen to take classes they think might interest them, not just those they already know they’re interested in. “And be open to changing your goal,” she said. “Just try to have fun with it because we’re here to learn but it should also be enjoyable.”

DuPont will graduate with her high school diploma and her associate degree this June. She’s already been accepted to the University of California San Diego and awarded the Shores Scholarship which grants recipients $29,000 a year for four years. DuPont is excited for the new adventure. “I love the location and it has a great reputation for its biology program,” she said.

She plans to study human biology with the ultimate goal of becoming a pediatrician. “I really didn’t know what I wanted to do when I started,” she said. “Taking Centralia College’s Anatomy and Physiology class made me realize what I wanted to do.”

This is just another way she uses her creativity, and she encourages others to do the same. “I feel like everyone has something to create,” she said. “So just create something! Creation makes the world a better place.”