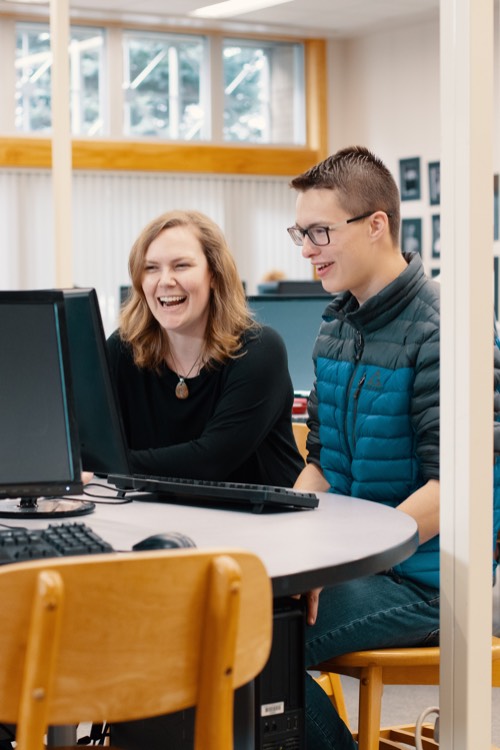 Fake News! Or Is It? How to Find  and Identify the Truth

We all want accurate information, but how do you know what’s true and what isn’t? What’s fake news? Don’t fear – this quick and easy guide will set you on your way to becoming a well-informed truth-seeking missile.

In a nutshell, confirmation bias is the tendency to view new information as confirmation of one’s own preexisting beliefs. This mental shortcut allows us to make quick decisions based on previous stereotypes or experiences.

This isn’t inherently bad but confirmation bias can become a self-fulfilling prophecy, blinding us to factual information by only allowing us to accept what we already agree with – or causing us to subconsciously alter information to align with our own preexisting beliefs.

Centralia College Information Literacy Librarian Katie Hart tells a story about her newborn infant to illustrate the point. “Doctors told me that little babies don’t smile until they’re six- to nine-months-old,” she said. “But at two weeks, my son gave me this huge smile. I thought, ‘He’s smiling at me because I’m such a good mother and he loves me so much.’ That was confirmation bias. I wanted to believe that was true, so I chose to interpret the evidence that way. Two seconds later, he had gas. The doctors were right. That was me making a yes out of the nos. We do the same thing with the media we seek out to construct our world views – we perpetuate those views by finding sources that confirm them.”

This happens on both sides of the political divide and, Hart said, isn’t always a bad thing. “It can help people participate enthusiastically and it also helps them make sense of things,” she said.

Unfortunately, it can also lead to alienation and a breakdown in cooperation. “That’s the downside,” Hart said. “It can lead you to believe your side is correct and the other side doesn’t have much to offer, which can lead to difficult times for negotiation.”

Search out disconfirming evidence to help balance your viewpoint.

Did you know two people can search the exact same thing online and get completely different results? Search engines, like Google and Yahoo, and social media sites, like Facebook, filter information so you get a personalized feed of what appeals most to you. This is known as a “filter bubble” or an “echo chamber.”

While this is great for clothing brands and hobby sites, these algorithms also cause users to see only sites and posts that reinforce their own social and political beliefs.

The same principal applies to online searches. Hart gave an example from Eli Pariser’s TED talk “Beware Online ‘Filter Bubbles.’”Two individuals searched the term “Egypt” in their browsers. One person’s results were populated with beautiful photos, cultural information and suggestions for specific areas to visit. The other person’s results focused on natural disasters, the Arab spring, radical Islam and war. The same search generated two very different realities based on the searcher’s past preferences.

“There is no standard Google anymore,” Hart said. “What’s in your filter bubble depends on who you are and what you do.”

“You don’t decide what gets in – and you don’t get to see what gets filtered out.”

To see a particularly powerful example of this, check out The Wall Street Journal’s “Blue Feed, Red Feed.” Click on various terms such as President Trump, Health Care, Guns, Abortion, Immigration and Executive Order to see how two Facebook feeds – one liberal and the other conservative – compare. The results will shock you.

This term has been thrown about frequently in recent years, but what does it actually mean? The definition isn’t as broad as one might think.

Fake news isn’t simply news that is skewed or biased. It’s news that has no basis in fact, but is presented in a way to make the viewer think it is factually accurate.

Although we’ve seen a spike in fake news claims, this type of thing has been around for a while (think grocery store tabloids). The issue isn’t the existence of fake news, it’s how hard it has become to identify.

“A lot of fake news created in the past was easily distinguished fake news or propaganda,” Hart said. “Now there’s a lot of different flavors of fake news. It’s very cheap to produce and it’s more sensational, shared more, more damaging and makes more of a profit on advertising.”

People produce fake news for several reasons, like to fool readers, to convince readers of a particular belief or provoke a passionate response, and to make money. You heard that last one right – sensational fake news (think of it as lucrative lying) generates more clicks – which equals more dollars in return.

Fake news can fall on a spectrum including, but not limited to:

Even fake video can now be created, making it look as though someone is saying something they didn’t really say. Check out this short video clip to see for yourself.

How to combat fake news: