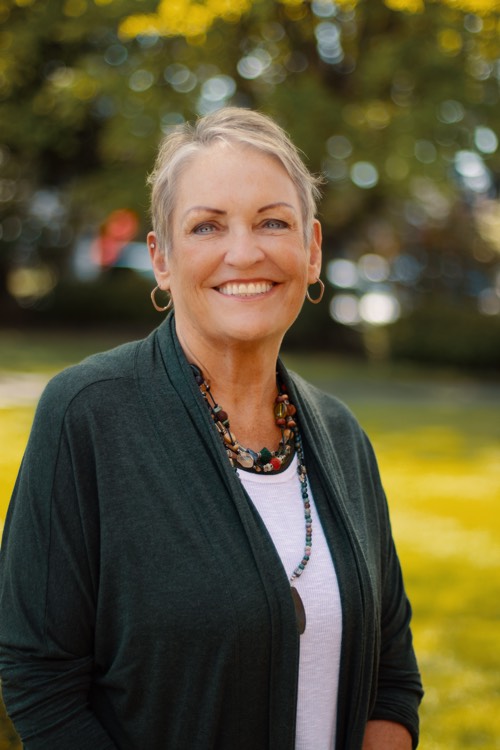 Anne Schuchmann is an unexpected breath of fresh air. After an accomplished career in nursing leadership, one might expect her to exude the stereotypical Type A personality. But the Centralia College nursing professor is fluidity and vitality embodied.

Schuchmann credits her mother for giving her a healthy outlook on life. “She told me, ‘You can do anything you want – you don’t have to be good at it,’” Schuchmann said. “We all start out thinking we can do anything but then everyone loses that childhood belief. But thanks to my mom, I’ve tried lots of stuff. I’m really lousy at a lot of it but someone gave me permission to fail.”

Schuchmann was born in the small, rural town of Tomah, Wisconsin. When she was young, her parents decided it was time to move west. The family relocated to the Santa Clara Valley in California. “Local Italians called it ‘the Valley of Heart’s Delight,’” Schuchmann remembered. She enjoyed the bountiful landscape, easy going culture and – after those frigid Wisconsin winters – warm climate. “We were barefoot in April,” she recalled.

As a young woman, Schuchmann married a military man and moved to Germany. There she found herself living in a packed apartment complex with nothing to do. “I figured there were about 2,500 people per street,” she said. “I had to do something. It was overwhelming.”

So, she enrolled at the University of Maryland’s German satellite campus. Here she completed her general education requirements and decided she wanted to become a doctor. After returning to the States, however, she decided nursing would be better. She earned her associate degree in Nursing from Central Texas College in 1980 and found the profession to be a natural fit.

Schuchmann moved to Washington in 1981 and began working at Providence St. Peter Hospital, where she would remain for the next 19 years. Those two decades were anything but stagnant, however. Over the course of her career, Schuchmann became adept at responding to a variety of challenges on a daily basis. She worked in a multitude of capacities including telemetry nursing, nursing supervision, directing senior services, sexual assault nursing, and directing regulatory compliance.

She advanced through the ranks, building upon her experience and knowledge as she went. Eventually she found herself working in a bachelor’s-level position based purely on merit. “It was at that point where preparation meets opportunity,” she said. “Two old cronies said I’d better go back and get my ticket punched.”

Schuchmann followed their advice and earned her Bachelor’s of Science in Nursing from St. Martin’s in 1994 and her Master’s in Nursing Leadership and Public Health Care Policy in 1999.

In 2000, she went to work for Group Health Cooperative, but stayed on as a sexual assault nurse examiner at St. Peter. Her new location was right in the inner-city of Tacoma – offering an entirely new set of challenges.

Schuchmann went to work at Providence Centralia Hospital in 2004. Overcoming challenges is a minute-by-minute occupation in the nursing field. But one of Schuchmann’s biggest challenges didn’t take place at a hospital bed, but at the negotiating table.

As Director of Nursing, she joined the hospital contract negotiating team, putting her in the hot and sometimes politically fraught negotiation seat. “I was contract ready but I had to understand the protocols specific to negotiation; when to talk and when not to,” she said. “It was difficult because I’m really pro-nursing. I believed my job was taking care of the people who are taking care of the people – servant leadership.” It was challenging but she made it through, learning as she went.

Schuchmann’s main role as nursing director was to go into troubled areas of the hospital and find ways to fix the root causes. “I was a fire jumper,” she said with a smile. “My job was not to be accusatory, but just to find out what was going on.”

Her leadership training came in especially handy when navigating difficult discussions with disgruntled nurses and staff. “They could be very, very, unhappy and have a hard time articulating their anger,” Schuchmann said. “I would try to find out facts, what the problem was and figure out how I could help them - all without placating them.”

Schuchmann understood that in the rapidly changing landscape of nursing, the atmosphere can shift drastically from moment to moment. So, she developed a strategy to get the full picture of how her team was operating around the clock. “It meant very little sleep on my part,” she said. “I rented a hotel room nearby for a couple weeks and would show up at all different times of the day and night.”

She recalls similarly sleepless nights during the flood of 2007. “We were there four days straight,” she said. “It was like ‘A Tale of Two Cities’ – it was the best of times, it was the worst of times. The first 24 hours were like Girl Scout camp – everyone was excited – but then people got tired. They were taking shifts sleeping on cots. Still, it really brought out the best in people. The director of finance was there taking popcorn around to people at 3:00 a.m. One employee went to Walmart to get supplies and brought me back a pair of leopard slippers for comfort – those were the days when we wore suits and high heels to work. I got to trade my work clothes for scrubs and leopard skin slippers! It was an experience, it really was.”

In 2013, Schuchmann became deputy director of the Washington State Nursing Care Quality Assurance Commission. When she left Providence, they held a special roast at the Fox Theater in her honor.

Teaching the Next Generation

After resigning from the Commission for health reasons in 2014, Schuchmann began teaching nursing classes at Centralia College. Today she covers everything from nursing theory and ethics to practical applications in clinical settings.

Just like practicing nursing, teaching nursing changes from moment to moment. You have to be ready for anything. Nursing school is notoriously challenging and requires good coping skills and a strong support system. It also presents people with their first taste of this essential field’s harsher realities. Fortunately, Schuchmann is ideally equipped to guide her students through.

“My nursing students were involved in a cardiac arrest the other day and they helped with compressions,” she said. “They had done that in a simulation lab but doing it on a human being is very different. Afterward they write a reflection and more than one reflected on how all this energy went into this resuscitation and it wasn’t successful – then everyone said thank you, walked away and immediately started doing what they were doing before. ‘How do they do that?’ My students wondered. ‘How do they go back?’ I explained in some situations there is time for a debrief but, when you have a group of people to care for, you must get right back to work.”

Schuchmann tries to equip her students with the skills they’ll need to survive and thrive in an often challenging environment. “I always believe knowledge is power,” she said. “I tell them stories because I want them to get a real picture of what it’s really like. You’re meeting people on sometimes the worst day of their life. Some are very thankful, but people aren’t always going to thank you. They might be gruff. They might tell you to get out of their room. You just have to keep going like the Energizer bunny.”

Although she occasionally misses life on the nursing floor, Schuchmann loves teaching and she’s not one to spend much time looking back. “My favorite job is the job I currently have,” she said. “I’ve liked everything I’ve done and everything has a season. This is my season to teach and I love it. I’m sending people into the world who will be taking care of me.”

In 2019, Schuchmann officially earned tenure. “It’s exciting,” she said. “We can be kind of cloistered in nursing and I had this chance to meet and work with other people which was so nice.”

When she’s not working, this grandmother of nine indulges her creative side on the stage. She’s performed in productions at the Evergreen Theater, Drew Harvey Theatre, Center for the Preforming Arts, the Olympia Little Theatre, and Centralia College.

She’s also gotten into Nia and yoga at Embody Movement Studio. “It’s like a sister/brotherhood,” she said. “It just feeds my soul.”

Nia and acting are natural accompaniments to Schuchmann’s organic life philosophy, which is also evidenced throughout her career. “I do not believe in leadership as being rigid,” she said.

Instead of exclusively focusing on accomplishing 100 percent of a goal, Schuchmann celebrates incremental accomplishments. “If you’re trying to implement something and you get 10 percent who are doing it, that’s great,” she said. “Then they can teach others. You don’t need to wait to the end to celebrate. My secretary and I would celebrate 32 percent accomplishment, just because it was better than the week before.”

For Schuchmann, progressive growth is what it’s all about. It’s a maxim she’s applied throughout her life and it’s led her to some pretty extraordinary places. She’s not afraid to try and she’s not afraid to fail. “But, to be clear, I’ve never failed anything,” she said with a laugh. “I just changed my mind.”