The Social Sciences help us understand the world beyond our immediate experience and explain how different societies work - from economies to feelings of happiness. 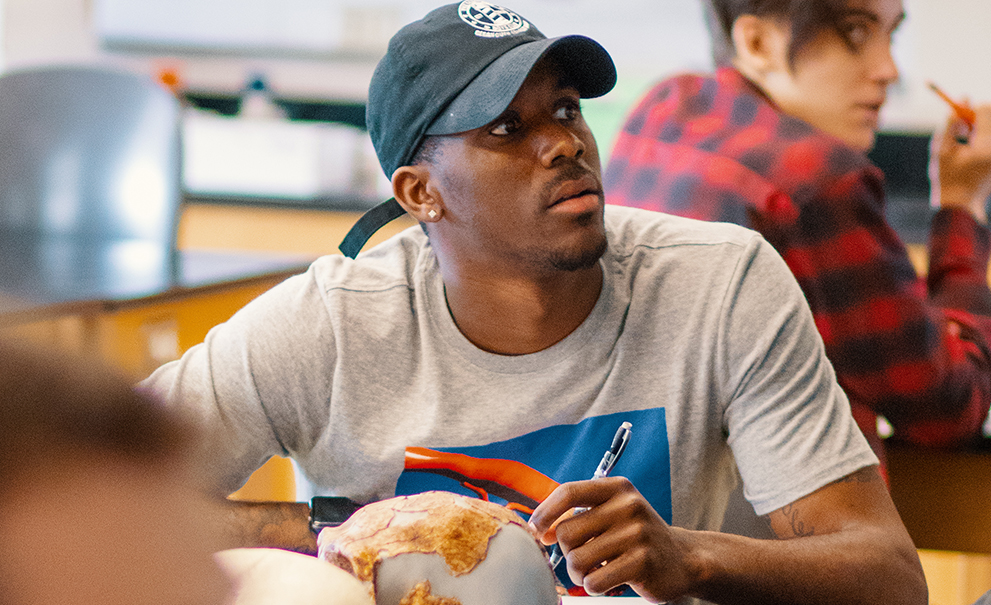 Through the study of history students systematically examine the past and gain an opportunity to explore human nature and contemporary concerns. Historians work from the written records (cultural, economic, political, and scientific) of past generations to discover the kinds of lives led and problems faced.

The Psychology program explores issues of human behavior and thought, provides the opportunity to gain a fuller understanding of yourself and others, and develops skills in human relations, communication, research, and analysis.

When you take sociology classes at Centralia College, you will explore the answers to life's biggest questions and the social research tools used to study them. You’ll learn about how social forces have shaped your own and others’ lives, increase your social awareness and intercultural competence, and develop your critical thinking and analytical skills.

While preparing the student for further study and eventual employment in the field of anthropology, this educational plan also is relevant for students preparing for a broad range of jobs in both government and international agencies that focus on cross-cultural issues and involve working with people from different cultural backgrounds. These jobs, in addition to work in international and government agencies, might include working in agricultural development and educational reform or as a consultant, planner, market analyst, survey researcher, forensic scientist, or refugee coordinator.

For a detailed list of careers, opportunities, meetings, and up-to-date news in the field of anthropology, visit the American Anthropological Association.

Emphasis in psychology provides preparation for a variety of careers, and will benefit students majoring in education, nursing, physical and occupational therapy, business, law, medicine, or other disciplines which deal with people.

Sociology prepares students for a wide range of careers in fields such as social work, education, criminal justice, human resources/management, and social research.

Visit the American Sociological Association’s website for more information on careers in sociology.

Participate in a four-field approach to the study of the diversity of humans and human cultures past and present around the globe. Gain a privileged view of the traditional subfields of anthropology : cultural anthropology, physical/biological anthropology. archaeology, and anthropological linguistics.

Explore the whole of the human social and cultural world by means of investigating other peoples' beliefs and behaviors. Through a cross-cultural perspective we attempt to understand others in order to better learn about ourselves.

Biological Anthropology ANTH&215 and ANTH&205 (online) are both 5 credit-hour natural science courses that explore human biological evolution and adaptation through the study of the history of evolutionary theory, the primate and hominin fossil record, and comparisons of human and non-human primate morphology, genetics, and behavior. The biological basis of life (DNA) will be discussed as it pertains to heredity, evolution, and adaptation. Included will be an overview of the scientific method and subfields of anthropology as well as modern human biological variation and culture.

*Note that the online course offering for biological anthropology (ANTH&205) has no lab component and counts for 5 lecture credits in the natural sciences exclusively (0 lab credit).

Investigate the wide and varied cultural systems of beliefs, behaviors and technology practiced by traditional North American Indian peoples. Learn about such topics as subsistence patterns, exchange and trading relationships, marriage and the family, political organization, the life cycle, and religion, belief and knowledge.

Join in an examination of ethnicity, ethnic identity, and the cultural characteristics of established and more recent ethnic and social groups in North America as well as around the world. Achieve an understanding of the relationship between social organization and forms of social, economic, and political domination and subordination.

Experience the supernatural and religious beliefs of peoples and cultures past and present around the globe. Examine different modes of constructing "reality" and "belief" as well as their methods of ritual application in societies worldwide.

Introduction to the study of the family as a social institution. An overview of social theories and methodological underpinnings will be included.

Cooperative Work Experience allows students to apply classroom learning to on-the-job settings. Credit is earned for new and continued learning taking place in the work environment. Reaching set learning objectives and development of positive work habits are emphasized. The Cooperative Education Faculty Coordinator, the student employee, and the worksite supervisor identify the learning objectives. 30-360 hours on-the-job per quarter. Instructor’s permission is required. Corequisite: Enrollment in a Work Experience Seminar is required of co-op students. You may take the Work Experience Seminar before or in the same quarter as the co-op course.

Examine ethnicity, ethnic identity, and cultural characteristics of ethnic and social groups in North America and around the world. Understand the relationship between social organization and forms of social, economic, and political domination and subordination.

Note for Students: Psychology majors are encouraged to develop a broad base in the social sciences.