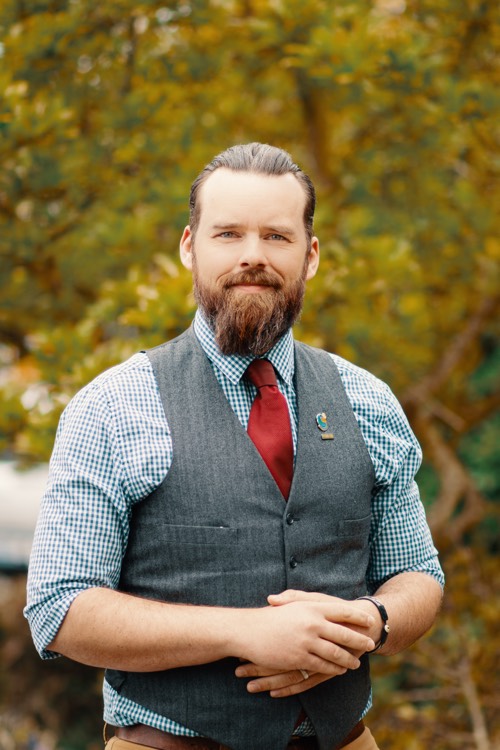 “The hallmark of successful people is that they are always stretching themselves to learn new things.” These words of wisdom come from Stanford Psychology Professor Carol S. Dweck and there’s perhaps no better sentiment to describe Centralia College Professor Daniel Spanksi-Dreffin.

Originally from Woodstock, Illinois, Spanksi-Dreffin came to Lewis County after his uncle recommended Centralia College’s Diesel Tech program. He was already well-versed in the field after taking shop classes in high school and working at a local automotive shop. So, after graduating early, he moved west to explore the option. “I realized pretty quickly that I didn’t like working on other people’s cars as much as my own,” he said.

Fortunately, Spanksi-Dreffin enjoyed the area and all it had to offer. Innately curious, he threw himself into several endeavors, including an international theater production. “These students came from foreign countries and at the end of their stay, a big part of their curriculum was to put on a theater production in English,” he said. “We sat down and talked them through their lines. Some didn’t know English when they came over. Others knew English well but they didn’t know the weird random things like implications and stresses.”

He enrolled in the college’s associate program and got involved in theater arts, where he met his wife, Kaaren. “She was in a majority of the theatrical productions at the time,” he said. “I figured out that I was much happier stage managing but I got a beautiful wife out of it, so it’s good I did it.”

During school, a family member connected Spanksi-Dreffin with a job opportunity at the local sheriff’s department. He was hired as a full-time corrections officer and quickly moved up to a supervisor position. He found the work challenging but rewarding. “It was an interesting job,” he said. “You learn things – some of the things I learned about and dealt with, I never want to talk about again. But some were amazing.”

It was here that Spanksi-Dreffin attended a Washington State retirement seminar. “I was in there with people who were 55- to 70-years-old, and here’s this weird 20-year-old guy,” he said with a laugh. “I’ve always been a numbers geek. My dad was in investments and trading. As a kid, I had an allowance and a fake checkbook I had to balance.”

After the meeting, Spanksi-Dreffin began chatting with other corrections employees, asking them about their retirement plans and discussing retirement strategy, planning, finances and benefits. “I knew a lot about the programs so I’d sit and talk to some of the officers,” he said. “I asked if they’d ever actually checked their Washington State retirement or used the retirement estimator. When planning, you have to take into consideration things like the county not paying for your medical benefits after retirement.”

These conversations ignited a spark in Spanksi-Dreffin. Two subsequent occurrences would fan the flames. First was a conversation with Larry McGee, who encouraged Spanksi-Dreffin to join Centralia College’s first cohort in the bachelor's degree program in Applied Management (BAS-AM). “[Working in corrections] is an amazing career and I love everybody there; I just knew it wasn’t my endgame,” Spanksi-Dreffin said. “I had the ability to go back to school and the county believes in having educated people so they reimbursed me for half of my bachelor’s degree. That was nice. It was a great job – it just wasn’t what I was going to be when I grew up.”

From Corrections to Calculus

Spanksi-Dreffin joined Twin Cities Rotary after becoming involved in Rotaract, their collegiate branch, during his AA. “I liked their worldwide service organization mission,” he said. “They want to make the community and people better. There’s no hidden agenda. They ask: Is it the truth? Is it fair to all concerned? Will it build goodwill and friendship? And does it benefit all concerned? If you live your life and run your business like that, it’s pretty simple; you don’t have to worry about a lot of nonsense. I’ve always been drawn to that.”

Through Rotary he met Don Wilson, a local independent financial advisor with Voya Financial, who offered professional advice and guidance. After graduating from the Bachelor’s in Applied Science program with honors, Spanksi-Dreffin took the leap and stepped out on his own. “I figured out I really loved doing financial planning,” he said. “It was really hard but I took the jump away from the nice career I had with the stable paycheck and benefits to working for myself and depending on myself for everything.”

From automotive to theater, corrections to finance, Spanksi-Dreffin has made a lifelong habit of stretching himself to learn and try new things. So, when a faculty position opened at Centralia College, he decided to throw his hat into the ring.

He now teaches Practicum In Management and guides the BAS-AM internship program. All his life experience is being put to work helping others. “I learn a lot too,” he said. “It’s nice to be able to have a discussion with all the students and all different viewpoints. The practicum isn’t a textbook and it’s not scripted; it’s a very open dialogue. It’s good to learn from your mistakes but it’s even better to learn from someone else’s.”

Spanksi-Dreffin enjoys helping students learn and grow through their internships – the way he benefitted from his. “It was the internship that showed me I can actually do it; I’m good enough,” he said. “It was that tipping point.”

Today, Spanksi-Dreffin uses innovative tools to balance teaching, running his business, volunteering with Rotary and his family life (he and Kaaren are now parents to a two-year-old little girl and an eight-month-old baby boy). Each week he maps out his schedule on an elaborate excel spreadsheet. “From Sunday to Saturday, each day is 24 hours on an Excel sheet,” he said. “I log time for sleeping, family time, grading paperwork and working on my financial planning business. If I have to change something, I find another hour or so within my week to do what I was supposed to be doing.”

When things get stressful, Spanksi-Dreffin literally floats his cares away. He discovered the practice of using a sensory deprivation chamber to calm and meditate several years ago in Olympia. He’s used it multiple times a week since, sometimes replacing hours of nightly sleep, which he finds less restorative than floating.

He shares time-management and coping skills like these with his students, in addition to accumulated wisdom. His diverse background has given him a wealth of experience to draw from. “I don’t run on status quo,” he said with a smile.