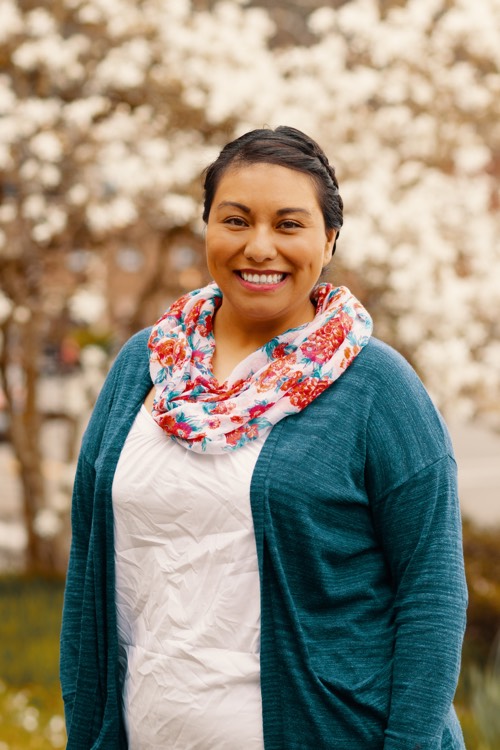 Jeanette Merino: A Bridge to Hope

At 15, Jeanette Merino became solely responsible for her two younger brothers. She was accustomed to caring for her siblings, as both parents worked long hours in the shellfish industry. “When I was nine, I remember getting up and making scrambled eggs for them when my parents were at work,” she said. “I broke up a lot of fights between my brothers. That’s just what I did. It’s just always been my life.”

The early years were rough. Merino’s father drank excessively and physically abused his wife and children. The family struggled financially and Merino and her siblings were often alone. Merino credits select schoolteachers for helping her survive. “The teachers knew our home situation and a lot really worked to support me,” she said.

Once, when she took her three younger siblings to the dentist, Merino was told that even though she had the correct paperwork, a 13-year-old couldn’t check them in. She needed a parent. Unfortunately, neither parent was available on weekdays, so she called her teacher. “She called the dentist and explained the situation,” Merino said. “So they rescheduled the appointment.”

Her father left when Merino was young, leaving her mother to care for their four children. “She was a single mother who didn’t know how to drive and didn’t speak English,” Merino said. “We taught her how to use the computer. She’d take the bus to English classes and we’d speak English to her.”

When her mother moved out of state with her youngest daughter, she left Merino in charge of her 11- and 13-year-old brothers. “I think it seemed normal to her,” Merino said. “She got married at 16.”

It was exceptionally difficult but Merino did her best to rise to the challenge. “I told the school not to accept a call or a note if my brothers were absent,” Merino said. “Those are too easy to fake. I told them they were only excused if I walked in there personally.”

Instead they issued a warning, which Merino relayed to her mother. “She came back for two years,” Merino said. “Then I decided I wanted to get married at 17. She was ok with that and signed me away so my husband, Sergio, was like my legal guardian.”

The young couple took responsibility for Merino’s brothers once again and slowly began building a life together. “My husband has really helped me raise my brothers,” Merino said. “He has always been right beside me.”

Again, Merino’s teachers helped support and uplift her. “I never thought I’d go to college,” she said. “I just thought I’d marry my high school sweetheart but my teacher said, ‘No, we’re going to do your financial aid.’”

Merino went on to graduate from dental assisting school and soon obtained a good job. “That was my career of choice,” she said. “I was going to live happily ever after as a dental assistant.”

She and Sergio bought a house and had three children. “I had my life figured out,” Merino said. “When everyone was having a bad time with housing and jobs, I was thriving.”

But after a while, Merino began to long for more time with her young family. She also began craving something else: the ability to make a real difference.

She knew exactly how.

“Today I still keep in touch with those teachers who helped me,” Merino said. “They’re my friends on Facebook and are still encouraging me. I want to be that for someone else. All the teachers I had growing up had some part of making me into the person I am today.”

Merino wanted to be there for kids in need, the way her teachers were there for her. So, after building a life from the ground up, she chose to reinvent herself – and she chose to start with Centralia College’s Bachelor of Applied Science – Teacher Education program.

Being a full-time student, mother, wife and employee isn’t easy. “I almost dropped out in the first quarter,” she said. “We were living in my old babysitter’s spare room. Things were hard. Then Jim Smith said, ‘I know you have this going on and I know you’re doing really well. Just stay with it and it will pass.’ And sure enough – once I made it past that quarter, we found an apartment and a job right away. I’m glad I didn’t quit. Now I’m literally just two months away from graduation.”

Merino is completing her student teaching at Horizon’s Elementary School and is already connecting with students in need. “I’m seeing things I recognize,” she said. “When a student always asks, ‘Are we going to have snack today? I’m really hungry.’ When their clothes are too small. When I have a little boy with defiance issues, I see my brother … I’ve definitely picked up on the signs. I connect with those kids.”

In determining the best ways to help these children, Merino’s perspective is invaluable.

She is also a cultural bridge. Born in America to Hispanic parents, she understands both cultures and enjoys helping others do the same. “I tell parents, ‘Come participate, even if you don’t understand what’s going on,’” she said. “Just be involved. Be there.”

Merino has seen many bicultural kids like herself restricted from opportunities because of cultural expectations. For example, immigrant parents may expect their daughters to come home, cook and clean after school in preparation for marriage, instead of participating in after-school clubs or sports. Teachers like Merino can help adjust cultural expectations for the benefit of the child. “I totally understand the culture and where they are in their mindset,” she said.

She’s looking forward to advocating for first or second generation kids like her who live in two cultures. “I want to be the one to translate the forms, do family fun night and bingo night,” she said. “I want to bring the community to be more involved with the schools so their kids have better opportunities. I want to set that foundation so kids know teachers are someone you want to trust.”

Her pupils are taking note. One Hispanic student recently told her, “We’ve never had a Mexican teacher before.” Seeing someone like themselves as an advocate in a leadership role gives them hope for the future and shows them what’s possible.

Merino is using her life experiences to help others. In doing so, she’s giving meaning and purpose to the difficulties she endured – turning tragedy to triumph. “It’s either laugh or cry,” she said, “and I only cry with the happy things, like when I do parent teacher conferences and get to show parents how [their student] wrote in the beginning of the year, and how they’re writing now.”

Merino is inspired by growth. Today she tells her brothers that while they may have grown up in a terrible situation, “at least we know our kids won’t.”

This sentiment applies to both her family and her students. With Merino behind them, their futures look bright.